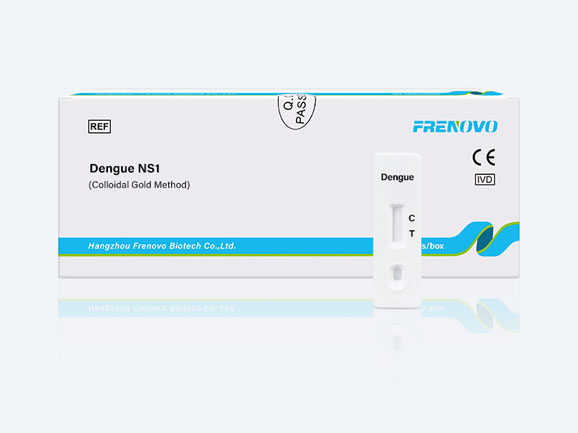 Dengue NS1 Ag rapid test is an in-vitro immunochromatographic, one-step assay designed for the qualitative determination of dengue virus NS1 antigen in human serum, plasma, or whole blood for the diagnosis of early acute dengue infection. This test device contains a membrane strip, which is pre-coated with anti-dengue NS1 Ag capture on the test band region. The anti-dengue NS1 Ag-colloidal gold conjugate and serum, plasma or whole blood sample move along the membrane chromatographically to the test region and forms a visible line as the antibody-antigen-antibody gold particle complex forms.

Dengue is an acute vial disease, which is transmitted by Aedes aegypti mosquitoes. Dengue is characterized clinically by biphasic fever, rash and hematopoietic depression, and by constitutional symptoms such as malaise, arthralgia, myalgia and headache. Infrequently, more severe disease is seen, manifested by hemorrhage fever which may progress to lethal shock. It isendemic in the tropics and subtropics, worldwide, where an estimated 100,000,000 cases occur annually. It has been estimated that about 50 to 100 million cases of Dengue Fever (DF) occur every year with about 250,000 to 500,000 cases, of Dengue Hemorrhagic Fever (DHF).

During 2002, more than 30 Latin American countries reported over 10,000,000 (DF) cases with large number of DHF cases. This has been followed by extensive epidemic of DHF in in several parts of India during 2003 through 2005. In the Americas, the reported incidence has more than tripled from 1996 to 2002. The incidence of Dengue outbreak has been reported in Hawaii, and in Laredo Texas. The potential for the virus to cause a severe disease has also resulted in the inclusion of this pathogen on the CDC "Category A" list for potential biological warfare and bioterrorism agents. Dengue NS1 (non-structural) protein is a multimeric secreted protein that is believed to play a role in viral RNA replication. It is strongly immunogenic eliciting antibodies with complement fixing activity. NS1 antigen can be detected in circulating blood during acute Dengue infection. The Dengue NS1 RapidDip Test detects NS1 antigen in serum samples following infection.

The Dengue NS1 Rapid Test is a qualitative, membrane based immunoassay for the detection of NS1 antigen in human serum.

The rapid test membrane is pre-coated with an NS1 specific antibody on the test line region and utilizes a separate control to assure assay flow and performance. During testing, the test sample is added directly to the sample region and the test is placed into a well containing 3 drops of buffer. The buffer and serum mix and interact with NS1-specific monoclonal antibodies conjugated to gold nanoparticles. The solution migrates upward on the membrane (via capillary action) to react with the anti-NS1 antibody on the membrane. If NS1 antigen is present, a red line will appear at the test line.

The red line at the control region should always appear if the assay is performed correctly. The presence of this red line verifies that proper flow has occurred and catastrophic failure of the conjugate has not occurred. The entire procedure takes approximately 30 minutes. 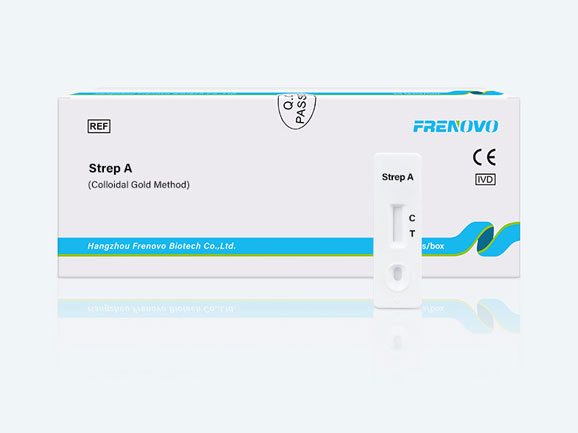